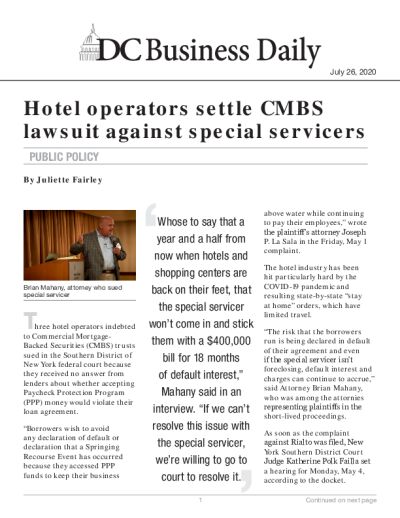 Three hotel operators indebted to Commercial Mortgage-Backed Securities (CMBS) trusts sued in the Southern District of New York federal court because they received no answer from lenders about whether accepting Paycheck Protection Program (PPP) money would violate their loan agreement.

“Borrowers wish to avoid any declaration of default or declaration that a Springing Recourse Event has occurred because they accessed PPP funds to keep their business above water while continuing to pay their employees,” wrote the plaintiff’s attorney Joseph P. La Sala in the Friday, May 1 complaint.

The hotel industry has been hit particularly hard by the COVID-19 pandemic and resulting state-by-state “stay at home” orders, which have limited travel.

“The risk that the borrowers run is being declared in default of their agreement and even if the special servicer isn't foreclosing, default interest and charges can continue to accrue,” said Attorney Brian Mahany, who was among the attornies representing plaintiffs in the short-lived proceedings.

As soon as the complaint against Rialto was filed, New York Southern District Court Judge Katherine Polk Failla set a hearing for Monday, May 4, according to the docket.

The hearing was rescheduled for Wednesday, May 6, but the parties settled over the weekend. By Tuesday, May 5, a notice of voluntary dismissal was filed by plaintiffs Beechwood Plaza Hotel of Appleton, University Hotel Development and KNK-Plaza Hotel of Green Bay.

“They all settled with a confidentiality provision so nobody knows what happened,” Mahany told Washington D.C. Business Daily. “If we had to file a hundred of these tomorrow, we would do it because I was hoping by now that we would see some movement by special servicers. Some of them are willing to work with their borrowers on PPP but it's the squeaky wheel.”

A Florida lawsuit filed by Beechwood Lakeland Hotel in the District Court for the Middle District of Florida was also settled and completed on Tuesday, May 5.

PPP money presented a unique challenge to hotel operators because when the federal government passed the Coronavirus Aid, Relief, and Economic Security Act (“CARES”) to create PPP, the money was doled out as a loan and hotel operators owing money feared violating their CMBS debt agreement, as previously reported.

“Whose to say that a year and a half from now when hotels and shopping centers are back on their feet, that the special servicer won’t come in and stick them with a $400,000 bill for 18 months of default interest," Mahany said in an interview. "If we can't resolve this issue with the special servicer, we're willing to go to court to resolve it.”

The defendants added to the confusion, according to the complaint, by not providing clarification, resulting in the lawsuit and the subsequent settlement.

"Of the special servicers, all of them not just Rialto, none of them want to see an adverse judgment," Mahany said. "They don't want that precedent while hotel owners want to be able to use the PPP money and reallocate reserves."